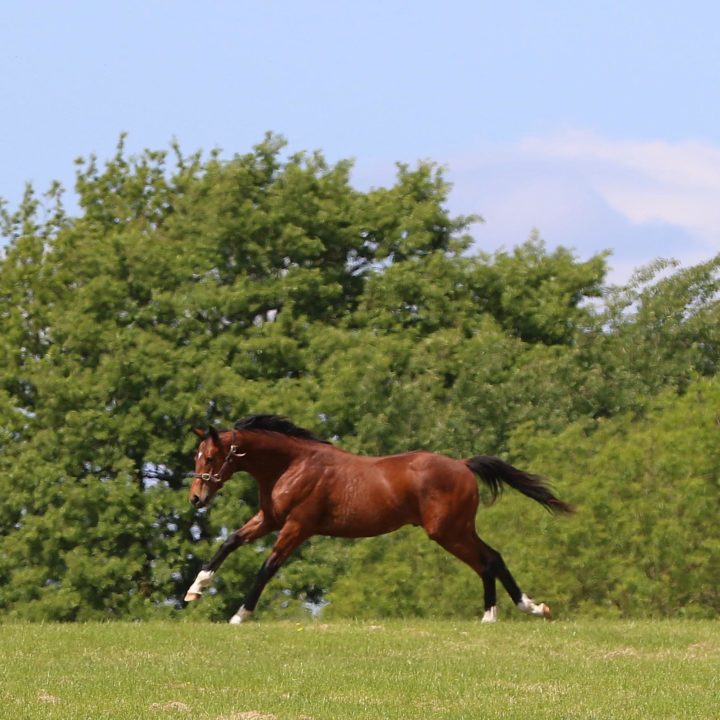 Article produced by the Thoroughbred Daily News on 17th September 2020

Many in this game associate the name Marlhill House with the successful Thoroughbred breeding and consigning operation based near Cashel, County Tipperary. In reality, though, its history of sporting success was established well before current owners, Eddie and Eimear Irwin, purchased it to become a stud in 1997.

Given the moniker in recent times of the ‘Home of Three Champions’, Marlhill House raised and grazed Ireland’s only Wimbledon Ladies’ Singles winner Lena Rice, who lifted the title in 1890. The baton of athletic achievement was then passed onto another resident in the form of Tipperary hurling legend Tommy Leahy, the winner of both Junior and Senior All-Ireland Medals in the 1930s.

Later in the 20th century, David O’Brien took up the reins at Marlhill House. Although he trained his horses down the road at Ballydoyle, it was where he lived when, at the age of just 27, he sent out Secreto to win the Derby in 1984, beating none other than his father Vincent O’Brien’s El Gran Senor–the hottest favourite heading into the race for 30 years.

These past achievements are not lost on Brian McConnon, who has managed the stud for the Irwins since 1998 and cites those that have gone before them when he says, “In terms of sporting accolades already achieved at Marlhill House, we have very big boots to fill.”

Horsemen can be superstitious beings, and while its history of luck in the sporting arena may have attracted the Irwins to Marlhill House when deciding on a place to settle, its position on Tipperary’s finest limestone pastures in the heart of the Golden Vale was likely to have been the main draw.

It is a point that McConnon confirms, “Eddie [Irwin] is from Cashel and being a local he obviously knew that [Marlhill] was on top-class limestone land. It’s also beside Rockwell College who have one of the finest dairy herds in the country. We wouldn’t be the first to discover that where you can raise good dairy cows, you can raise top-class Thoroughbreds.”

It is a theory backed up by their results, and those “big boots” that McConnon referred to previously have gone some way to being filled already. Indeed, the first crop bred at Marlhill House Stud threw up the prolific Group 1 performer Bowman’s Crossing (Ire) (Dolphin Street {Fr}). He was followed soon after by the winner of the GI Breeders’ Cup H., Luas Line (Ire) (Danehill), who went mightily close to winning a Classic for the team when she was third by half a length in the G1 Irish 1000 Guineas.

In fact, there has been a continuous flow of stakes winners bred at Marlhill House Stud since its inception, many of which show up in the pedigrees of its sales yearlings. They are families that have taken time to nurture, as McConnon explains, “Our business model has always focused on quality over quantity. We have 12 very nice mares at the stud at the moment and it’s taken a while to get them to that level. We’ve spent a long time building up the broodmare band to where it is today; it’s not something that happens overnight.”

He continues, “We’re a commercial operation and we breed to sell but producing yearlings that are sent to good trainers and go on to be successful on the track is the ultimate goal for us. Any winner provides a great buzz but breeding a Classic winner would certainly be the pinnacle.”

Despite the challenges presented by 2020, McConnon remains cautiously optimistic about the sales and speaks enthusiastically about the 10 yearlings they have heading to the sales this year, split five apiece between Tattersalls October Book 1 and the Goffs Orby.

He says, “We’ve a lovely No Nay Never filly out of Royal Blue Caravel (Ire) selling at Book 1 (lot 409). She’s from a family we’ve had a lot of luck with. We bought her grandam Holly Blue (GB) from The Queen a number of years ago and she has bred two group winners. One of her daughters Scream Blue Murder (Ire) bred Ahandfullofsummers (Ire), who was second in a Group 3 recently, and her daughter Blue Cabochon (Ire) was third in a listed race at the Curragh last month. So those are two timely updates for her pedigree.”

He continues, “Another I’m really excited about is a Fastnet Rock (Aus) colt we have out of Stars At Night (Ire), who is a Galileo (Ire) half-sister to Blue Bunting. He’s a very strong colt with a lot of quality and also heads to Book 1 (lot 462). We bought the dam specifically for that magic cross of Fastnet Rock with a Galileo mare and hopefully she’s lucky for us.”

In recent years that “magic cross” has produced Group 1 winners such as Qualify (Ire), Zhukhova (Ire) and Intricately (Ire), and it requires the type of foresight that does not just happen by chance. Indeed, all planning at Marlhill House Stud is thoroughly thought out. McConnon says, “When it comes to selecting first-season sires, there’s no hard and fast rules, it all depends on the individual. We have two colts by Highland Reel (Ire), and with him it was hard to look past his race record, having been a Group 2 winner at two and being as tough and sound as he was to win at the highest level all over the world until he was a 5-year-old. To top it off, he’s a lovely horse to look at and seems to be passing it on to his progeny. We’re extremely happy with the two that we have to sell this year.

“Another first-season sire we’ve supported is Caravaggio. Being by Scat Daddy and having the speed to win a Group 1 at six furlongs, we felt there were a lot of similarities with No Nay Never, and I was blown away by how good a mover he is. The filly out of Margarita (Ire) that we sell at the Goffs Orby (lot 274) is very similar in that she’s very racy and has a great walk.”

The events of the 2017 Goffs Orby Sale will live long in the memory of the team at Marlhill House Stud when their Frankel (GB) colt out of Belesta (GB) (Xaar {GB})–now known as the Group 3-placed Old Glory (Ire)–topped proceedings at €1.6 million. With a hope that history can repeat itself when they return to this year’s renewal with his full-brother, McConnon says of lot 46, “Physically, this year’s colt is probably more precocious-looking at this stage. He looks an out-and-out 2-year-old, but they both have the same big walk and great minds which seem to be a trademark of the family.”

As loyal supporters of Starspangledbanner (Aus), the stud has three by the sire heading to the sales this autumn.

“They are three lovely colts,” says McConnon, “but the Princess Desire (Ire) selling in Book 1 (lot 371) is the pick of them. He’s one of those yearlings who has just had it since day one. He’s a gorgeous individual who is hard to fault.”

He adds, “Our final yearling to sell this year is an April-born Galileo colt out of Thai Haku (Ire) (lot 490). He’s the full-brother to a stakes winner in Sarrocchi (Ire) and is doing everything right at the moment. I think he should be very popular.”

McConnon’s optimism ahead of the sales is catching, though he remains realistic about the current situation.

“So far, our preparation has gone well, but the last few weeks are always quite a tense time as you try to put finishing touches on them and hope nothing goes wrong. Our time in the shop window is quite a short one so everything has to go like clockwork,” he says. “We have done our best to move with the times this year by bringing ourselves online with a new website and greater use of social media. We hope that it might give those who are unable to attend the sales due to COVID-19 as much opportunity as possible to look at our yearlings.”

He adds, “Despite the uncertainty surrounding coronavirus I was quite surprised at how strong the demand was in the Southern Hemisphere and also the 2-year-old trade at the sales in Europe. I’d say as long as vendors are realistic about their valuations we should be able to get through this. As with any year, the cream always rises to the top so there has to be optimism. I’m optimistic so I hope everyone else is too.”